Conservation of threatened aquatic species is a concern that is both local and international. The Campbell River non-profit society, the BC Centre for Aquatic Health Sciences (BC CAHS) supports conservation efforts that extend far outside the local area – even as far as Guyana in South America.

BC CAHS CEO Jim Powell was asked to join an international team of scientists looking into developing a catch and release strategy for the apex predator fish the Arapaima. Arapaima are a sought after game fish by high-end fly fishers because of their great size (up to 250lbs), and their acrobatics when hooked. Sadly, because of their size and value, they are often poached despite non-retention regulations that permit sport fishing catch and release. Tourism infrastructure development is seen as a method to raise awareness and protect the threatened river monster.

The International Development Bank and Canadian International Development Fund help support an initiative that is training indigenous Amerindian fishers to become high-end fly fishing guides for tourist fishers. The catch and release strategy dovetails with a scientific effort to understand the population genetics of the fish, define its habitat use, chart its seasonal movements and gauge the effect of catch and release activities. Powell was part of the scientific team because of his experience in recreational fisheries and his formal training as a fish physiologist. His role was to obtain tissue samples for DNA analysis and blood for stress hormone levels.

When the team was on the ground in Guyana they found that sparse ‘Cashew rains’ in November did not leave the Arapaima with enough water in their breeding ponds and many ponds had dried. Because the Amerindian riverine food fishes had left the area for deeper water, the indigenous people took to harvesting the now vulnerable Arapaima. Sadly, many prospective adult brood fish were harvested due to lack of food. The situation was made worse by delayed arrival of the March rains that should flood the savanna and open up feeding grounds for newly-hatched juvenile Arapaima. Besides fishes, many Caiman (local alligator species) also perished because of the drying ponds.

Fortunately some ponds had enough water to support Arapaima and the capture of a few fish was possible. The fish were seine netted by the staff, measured for length and girth, weighed and the tissue/blood sample taken. The DNA samples will be archived for later sequencing and the blood samples analysed in the BC CAHS lab for the stress hormone cortisol.

As the photographs demonstrate, getting measurements and samples from a large fish is not an easy task. As well, sometimes the net held unwanted targets, such as the 2.5m Black Caiman (a species of alligator) that was not happy to be disturbed.

Probably the biggest lesson learned is that the urgency of the conservation effort for Arapaima in the Karanambu area of Guyana needs to be stepped up. The team will be back in November to focus on another region that did not witness the full impact of the changing environmental pattern. Hopefully they can continue their work towards protecting and conserving this valuable species. It’s good to know that Campbell River know-how is being used not just at home, but abroad. 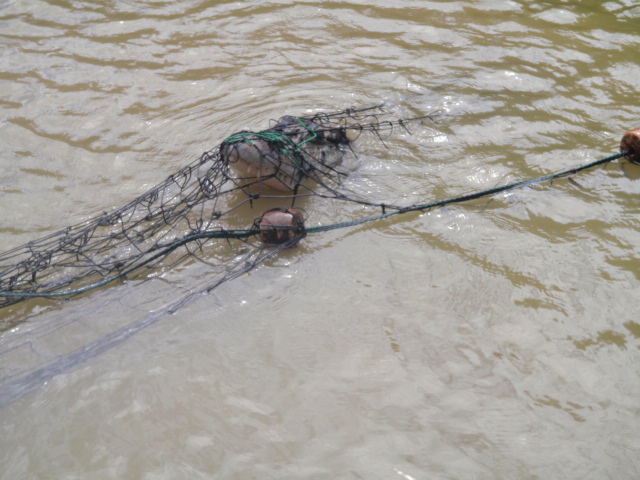 This 2.5m Black Caiman was brought up in the seine. It was released without harm to either the Caiman or the crew. 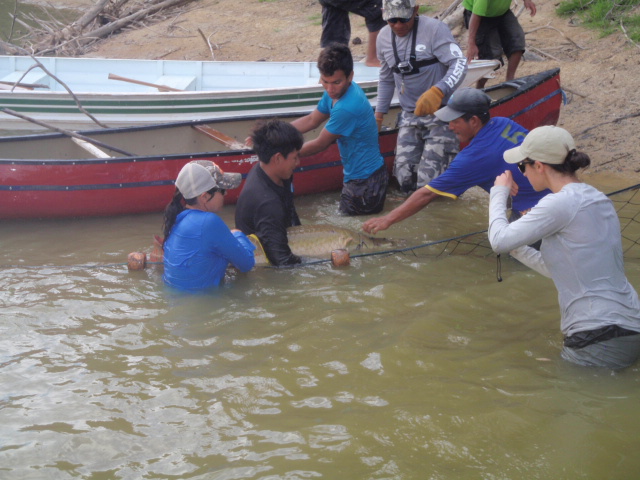 An Arapaima is freed from the seine net by staff and Amerindian crew. 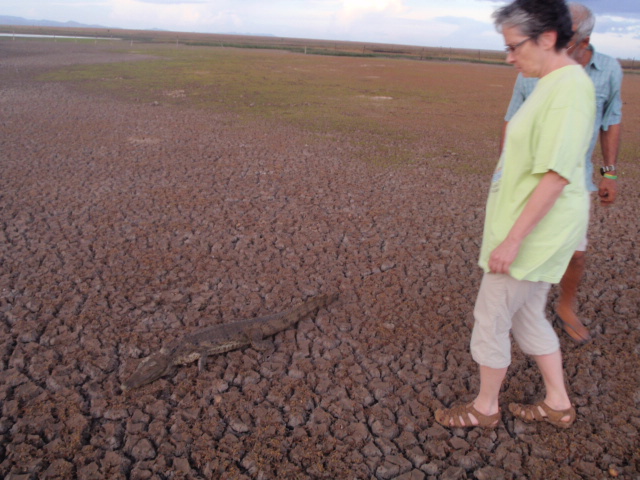 Science Lead Dr. Ilze Berzins DVM from Minnesota looks over a Black Caiman that has succumbed to the drought conditions. 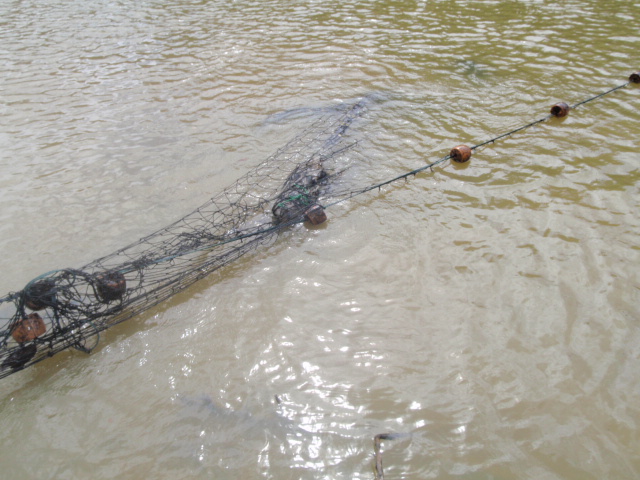 Alternate photo of the Caiman 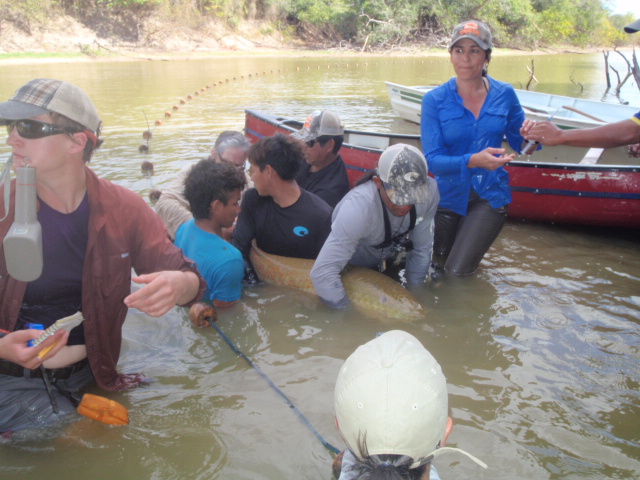 Getting ready to tag the Arapaima. 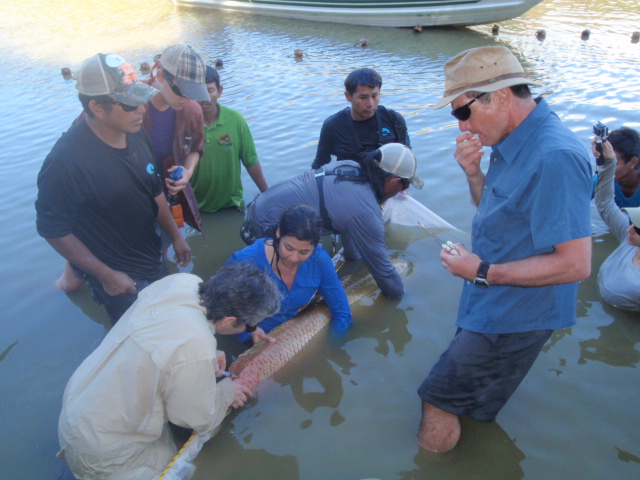 Taking blood and tissues from the tagged Arapaima. 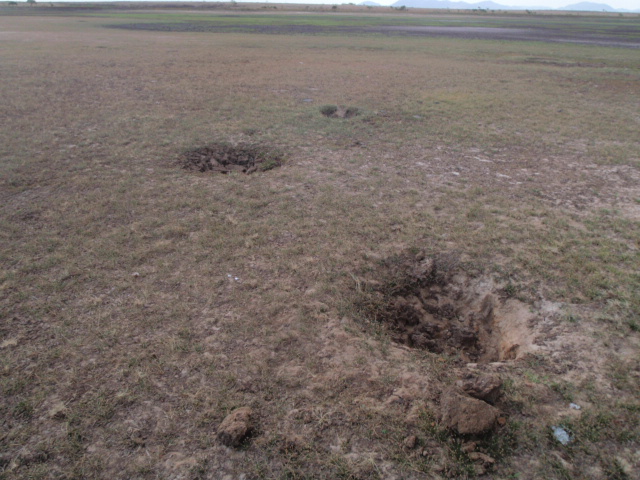 Sadly, due to lack of rain, some of the Arapaima nesting ponds were dried and the fish taken. This was a nursery pond for Arapaima in previous seasons.